Back in February we wrote about the annual FrankCrum Golf Invitational benefiting Trinity Cafe. Now, several months later, the official numbers are in. FrankCrum is proud to announce that the 2012 golf tournament raised over $100,000.

Brigitte Becker, Tournament Director and FrankCrum’s VP of Workers' Compensation Claims, reports that the first tournament held in 2008 netted $57,000 in proceeds to the charity, however this year the elusive six- figure goal was finally achieved with total proceeds netting $100,163. “The generosity of the sponsors and the attendees were particularly overwhelming this year which contributed to our ability to surpass our prior year’s results," said Becker. "Everyone at FrankCrum is elated to be able to support such a worthy organization as Trinity Café in Tampa, FL whose mission is to serve nutritious meals to the homeless and hungry with a sense of dignity." 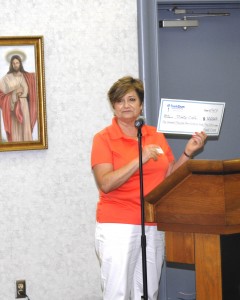 The check was presented to Trinity Café at their annual Volunteer’s Appreciation Brunch on April 14, 2012. Jeff Darrey, Board Chairman and Founding Director of Trinity Café expressed his gratitude saying, "the business of FrankCrum is the business of people. But they are more than a business. They are a committed supporter of Trinity Cafe which unconditionally serves the homeless and working poor of our community. The Annual FrankCrum Golf Tournament to Benefit Trinity Cafe accounts for a significant portion of our annual budget. Additionally, the staff and management truly have passionate hearts for the mission of Trinity Cafe. They do more than talk the talk. They walk the walk."

Each weekday, Trinity Cafe addresses the nutritional needs of the hungry and homeless of Tampa Bay by serving a well-balanced, restaurant quality meal. It is served with unconditional respect and a sense of dignity. The nutrition is critical to the well-being of the 200 daily guests representing tens of thousands of the homeless, the hungry and those facing “Food Insecurity” in our community. 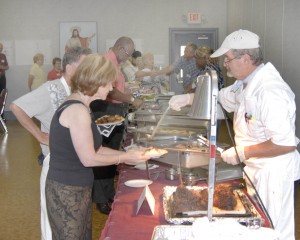 The 2013 tournament will be held on February 18 at Innisbrook. FrankCrum’s team hopes to exceed 2012's fundraising results.