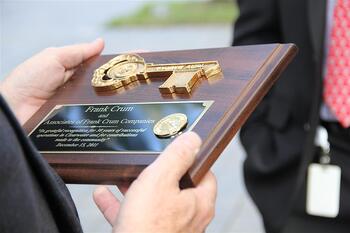 Frank Winston Crum, Jr., president of FrankCrum, was awarded the Key to the City by Clearwater Mayor Frank Hibbard last month at a ceremony Crum organized to recognize his employee’s anniversaries with his company. The timing of the mayor’s visit was arranged by human resource director David Peasall and took Crum completely by surprise.

“The key to the city is more about our team of employees and the culture we encourage here than it is about me,” Crum said Tuesday. “I was honored for Mayor Hibbard to have presented me with this recognition because no one would give a key to someone who had not proven themselves trustworthy. 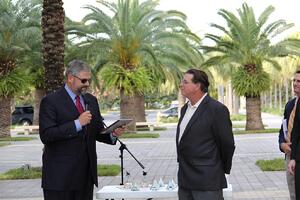 Bestowing a Key to the City is an honor that dates back to medieval times when a city’s walls were locked and guarded. Granting someone the key to the city enabled them to come and go at will, recognizing them as a trusted friend and ally. These days, while purely symbolic, presenting someone with a key to the city signifies the highest honor and respect of a member of the community.

The presentation of the Key to the City is a longstanding tradition in Clearwater. Recipients are chosen by the mayor based on extraordinary contributions to the community over an extended period of time. 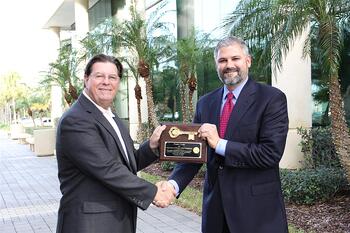 “Frank Crum has grown his business and made tremendous contributions to local not-for-profit organizations during the past 30 years,” said Mayor Hibbard. “He was given the key to the city because of his dedication to the city of Clearwater and the local community.”

Anyone familiar with downtown Clearwater has likely seen the impressive headquarters building located on the corner of Missouri and Cleveland. It is complete with four-foot silver letters bearing the name FrankCrum, and an impressive, sculpted fountain by Crystal Beach artist Hal Stowers. Since 1981, Crum has run a successful human resources company, specializing in staffing, insurance and outsourced human resource solutions.

Crum’s community involvement is far reaching, but the organization he holds closest to his heart is Trinity Café. Crum sits on the board of this association whose mission is to “restore a sense of dignity to the homeless and hungry while serving a nutritious meal.” All of the meals are served on real place settings by a volunteer wait staff, so patrons don’t have to stand in a line as they do in most free kitchens. Every year, Crum organizes a charity golf tournament to raise funds for Trinity Café. He also encourages his corporate employees to donate $1 per paycheck to the organization in exchange for wearing jeans to work on Fridays. 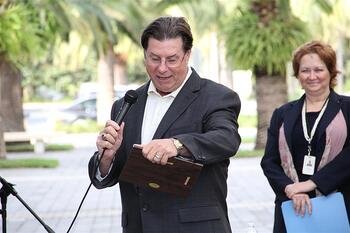 Crum is also involved in fundraising for the Clearwater Free Clinic, and opens up his corporate office for their annual Martinis and Matisse fundraiser.