Over 750 people mixed and mingled in the FrankCrum Courtyard on January 21, 2012 for the annual Martinis and Matisse fundraiser. Over $160,000 was raised at this event for the Clearwater Free clinic. Attendees sipped Bonefish’s signature martinis and sampled specialties from a dozen area restaurants while perusing over 125 pieces donated by local artists. 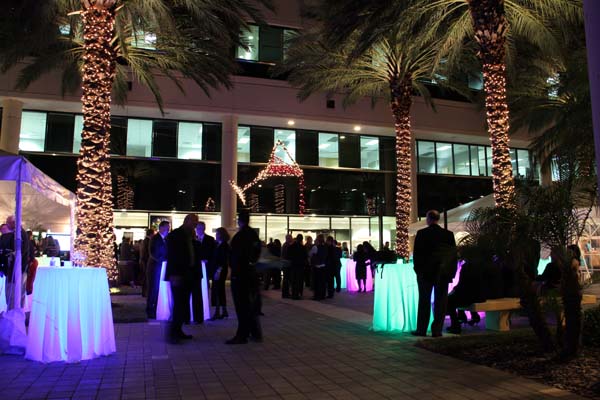 Since 2007, Frank Crum, Jr. has opened the doors of his nearly 130,000 square-foot facility to host this event. The FrankCrum building, which takes up a whole city block in downtown Clearwater, seems a natural venue for a fundraiser centered around art. It boasts beautifully sculpted fountains designed by famed Crystal Beach artist Hal Stowers, and a 16-ton, solid granite ball that constantly revolves on a thin sheet of water. Throw in magnificent pieces by local artists and a giant lighted martini glass hanging between palm trees in the courtyard and you could easily think you’d been transported to a ritzy gallery opening.

“The facility lends itself perfectly to this event,” said Jeannie Shapiro, the executive director of the Clearwater Free Clinic. “The building is already so magnificent- everything fits perfectly. We love being here.” 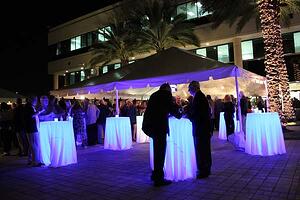 Crum, who does not ordinarily open his 14-acre property to the public, makes only one exception every year. “I believe in this organization,” said Crum. “They provide a much needed service in the Clearwater area and I want to support them in any way that I can.”

The clinic, opened in 1977, provides low-cost health care for the uninsured in the Bay Area and is funded entirely without government assistance. In 2011, the Clearwater Free Clinic provided over 14,000 office visits and 33,000 courses of medication. Martinis and Matisse raised approximately $160,000 this year, which will cover less than 20% of the clinic’s yearly operating budget. Susan Murbach, a Clearwater Free Clinic Board Member also served as the 2012 Martinis & Matisse Chairwoman along with Honorary Chairs, Bob and Lesa Boos.

In a traditional auction, a piece is awarded to the highest bidder. At Martinis and Matisse, however, winning takes equal parts interest and luck. It is a Chinese raffle, so rather than actively bidding, participants slip tickets into oversized martini glass located beside each piece. Attendees are given 5 art tickets upon arriving and are given the opportunity to purchase more if they choose. There is no limit to the number of tickets each person can purchase, so the more tickets you place in the glass, the better chance you have of walking away with your piece at end of the night.

“There is an element of excitement to the night,” Shapiro says. “I think everyone loves the thrill that goes along with winning.” 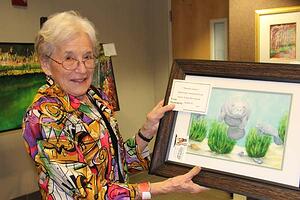 “I never win anything,” said attendee, Alice Kourchenko, as she posed with her newly acquired painting Manatee Family, by Elaine McCormick. “This is so exciting!”

“Straight Up” tickets, available for $175, included 5 lottery opportunities to win; “Shaken, Not Stirred” tickets went for $250 and included an extra lottery opportunity for a pair of diamond earrings donated by the International Diamond Center. The event sold out over a week before the event.

Visit the Clearwater Free Clinic website for more information on the impact they are making on the Tampa Bay Area.