The 2020 election cycle played a big role in marijuana legislation—each state with a ballot initiative to legalize cannabis voted in favor of the measure and most of these states have moved forward with legalization. Arizona, Montana, and New Jersey legalized it for recreational purposes, while South Dakota voters approved the legalization of medical marijuana.

To increase your awareness and help you decide what is best for your organization, FrankCrum has put together the guide below. The information enclosed is not legal advice and clients are encouraged to reach out to their HR Consultant for help navigating their specific situations.

Marijuana is illegal under federal law, but several states have legalized the drug to a certain extent. Although more states continue to pass laws to decriminalize or legalize marijuana use, the push for federal action is ongoing. And, while each state takes its own stance on the matter, the disparity of drug laws across the nation is extreme.

Some states have legalized both medical and recreational marijuana while some have only greenlit the substance for medicinal use. So what is the difference? Marijuana is only considered medical if dispensed to a state-qualified patient and taken under the supervision of a medical professional. In contrast, recreational marijuana is not taken under any supervision or guidance and generally contains high levels of THC.

In some states, marijuana may be decriminalized; this means possession of marijuana may remain illegal but a violation may only carry a civil penalty or fine and criminal sanctions have been removed.

Take a look at the chart below regarding marijuana legality by state.

*amount listed may or may not entail civil penalties

**states that classify marijuana possession as a misdemeanor but do not include incarceration have been noted in the chart as not being decriminalized.

While many states have legalized or decriminalized marijuana use to a certain degree, there have also been regulations put into place regarding past offenses and how this impacts an employer’s ability to conduct background checks. New Jersey has specified that past marijuana-related offenses that would no longer be illegal in the state cannot be the sole basis for rescinding an offer of employment. California law does not allow employers to consider non-felony marijuana-related convictions more than two years old.

Additionally, some states have provided pathways to individuals with criminal records to have convictions removed. The following states have authorized automatic expungement or sealing of certain marijuana-related convictions based on severity and/or how much time since the offense: California, Delaware (1st offense), Illinois, New Jersey, New Mexico, New York, North Dakota (1st offense), Vermont, and Virginia.

The following states have created a streamlined process for individuals to petition for the expungement or sealing of certain marijuana-related convictions: Arizona, Colorado, Connecticut, District of Columbia, Hawaii, Massachusetts, Maryland, Nevada, New Hampshire, and Rhode Island.

Marijuana in the Workplace

As drug use laws evolve across the nation, what does this mean for the workplace? No state law requires an employer to tolerate marijuana use at work or employees who work under the influence. However, if an employer operates in a state that has legalized marijuana use, especially for medicinal purposes, caution should be taken before taking a zero-tolerance stance.

Most states that have legalized medical marijuana expressly prohibit employers from 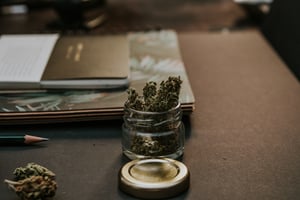 taking adverse action based on an employee or applicant being a registered medical marijuana user. This is because this status implies that the individual has a serious medical condition, which may be protected under the ADA.

While some states have regulations limiting an employer’s ability to take adverse action against an employee for engaging in lawful activity outside of work, this does not necessarily mean the use of marijuana in states where it is legal is protected. For example in Colorado and Oregon, marijuana use is not protected as a lawful off-duty activity. However, Nevada and Maine do consider the use of cannabis outside of work a protected activity.

Since marijuana is still considered a Schedule I drug at the federal level, federally funded companies must consider marijuana an illegal drug and test for it under the Drug-Free Workplace Act of 1988. Additionally, employers can maintain a zero-tolerance drug policy if they are federally funded and mandated to perform drug testing or if employees work in safety-sensitive roles.

Even so, employers should proceed with care before taking adverse action against employees who are lawful marijuana users, particularly where the employee's use occurs off-premises and outside of working hours. As with any corrective action, employers should carefully document the basis for their decision-making.

Dispelling Myths About Marijuana in the Workplace

Myth #1: Employers can't remove a person from a job because they use marijuana.

It Depends. A few things determine this answer: your state's law on marijuana use, when or where the individual uses marijuana, your workplace policies, and the job type.

Employers have a duty to protect employees. Employers can deem workers unqualified for a job because of the effects of marijuana. For example, a driver could injure themselves or others while performing the job's duties if impaired by marijuana.

Myth #2: Legalizing marijuana for recreational use means it's okay to use on the job or that employees can show up under the influence.

No. Simply because marijuana is legal for recreational use at the state level does not mean it is allowed on the job. Alcohol and prescription medication use are good comparisons.

For example, just because someone takes prescription painkillers does not mean they can work while under the influence. It may be legal, but dependent on workplace policies, it is likely not tolerated.

Employers should enhance written policies to clearly communicate what is and is not tolerated. They have the right to set rules for the non-medical use of marijuana in the workplace.

Myth #3: I cannot remove an employee from a job if they test positive for marijuana but legally carry a medical marijuana card.

It Depends. Almost all employers are permitted to enact a zero-tolerance drug policy regardless of state marijuana laws. Unless your state's laws specifically prohibit employers from firing employees for off-duty marijuana use (even for medicinal purposes), the laws become a bit muddy. It's advised to always proceed with care and diligently document the reasons for your decision. FrankCrum clients can reach out to a FrankAdvice Consultant for more information on how to handle each situation.

Myth #4: Drug testing is a good indicator that my employee is actively impaired on the job.

No. Drug tests are not an indicator of whether or not an employee is actively impaired. This is why some companies across the United States have chosen to stop testing job applicants for cannabis. Marijuana metabolites may remain long after use, so just because a worker tests positive does not mean they are actively impaired or were under the influence while on the job.

If an employee partakes in marijuana after work hours and tests positive, an employer cannot accurately determine whether or not the employee was under the influence at work. An employer may only be able to determine this if they're on the lookout for signs of impairment on the job.

Marijuana legislation is continually evolving, so it's important to keep managers informed about developments regarding employment law. With new leadership in the Capitol, we're likely to see even more measures in favor of marijuana legalization. Employers should routinely review their drug use and drug testing policies to ensure they remain compliant with ever-changing state and local laws.

Don't forget to properly communicate drug policies and testing requirements to employees. Employee safety and performance should be every company's primary concern.