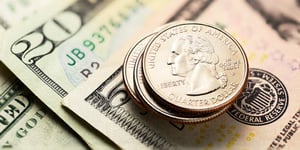 The federal minimum wage has been set at $7.25 since 2009. But is minimum wage going up this year after holding firm for over a decade? We’ve heard a lot about wage stagnation in the media lately. It’s part of presidential candidate stump speeches. It’s part of social commentary as movements like “Fight for $15” gain global notoriety. It’s part of state government and Congressional debates. And it’s part of corporate conversations as companies decide how to balance profits, labor and resources.

The Rise of “Minimum Wage Rage”

With low unemployment, the U.S. is experiencing its longest economic expansion in history. In this environment, a natural increase in wages is expected, but that hasn’t happened.

Whether wages are perceived to be slowly growing, stagnant or declining is debatable and greatly dependent upon variables such as inflation, industry, time period and region. However, there is no doubt that millions of workers feel their wages aren’t keeping pace with the economy. The lowest-paid workers experiencing the harshest sting of income inequality are becoming increasingly disgruntled. “Minimum wage rage” has drawn attention to the issue, driving a national dialogue to find solutions.

A tight labor market typically allows workers to demand and receive higher wages from their employers. So why aren’t we seeing a significant boost to incomes in this thriving economy?

Global competition has increased steadily for decades, influencing U.S. employment. The rapid advancement of automation technology has provided employers with cost-effective ways to replace lower-skilled workers, but even these factors don’t entirely explain the unusual way wages are behaving.

Some speculate that the U.S. is holding onto trauma related to the Great Recession. Workers seem more inclined to look for job stability than to fight for an increase in their paychecks. And employers seem cautious about increasing salaries, anticipating a potential downturn.

Another possible factor contributing to wage depression is labor market concentration. In some areas of the country, there are too few employers competing for the same workers on a local level. When this happens, employer power far exceeds that of employees and paying lower wages is common.

These, along with falling union memberships and rising healthcare costs, have contributed to low-wage workers struggling to stay afloat. With the uptick of homelessness and poverty, it is no wonder that many lawmakers have turned their attention toward increasing the minimum wage.

There are advocates, like Jeff Bezos, who favor a $15 minimum wage. But there are also plenty of skeptics who are concerned that these changes might end up hurting those they seek to help.

They argue that if the minimum wage is increased, employers, especially those in low-wage labor markets, will respond by adapting their business models to protect profits. This would likely include hiring fewer lower-skilled workers. Such positions might be replaced by resources overseas. Or, employers might choose to expedite high-tech automation solutions, which would permanently eliminate the need for lower-skilled jobs. Either way, the most vulnerable workers could end up being hit with job losses, worsening economic inequity.

The Battle for a Higher Federal Minimum Wage

The federal minimum wage has remained at $7.25 for over a decade. In July 2019, the House responded by passing the Raise the Wage Act, which would increase the federal minimum wage by $1.10 each year until it reaches a maximum of $15 in 2025. The gradual increase was projected to give 33 million Americans a raise, lift 1.3 million Americans out of poverty, and boost the economy by providing workers with more spending money.

However, the sharp pay increase made some lawmakers nervous. In fact, the Congressional Budget Office suggested that it might trigger job losses for 1.3 million low-paid workers. The Senate Committee on Health, Education, Labor and Pensions decided against considering the bill, essentially killing it.

Despite push-back from big business organizations and their Republican allies in Congress, the idea of raising the minimum wage to $15 is popular with regular voters. Even some corporate stalwarts like McDonald’s and the U.S. Chamber of Commerce are warming up to the idea of raising the pay floor. Without government intervention, retailers such as Wal-Mart, Costco, Target and Amazon have used competitive wages to attract and retain workers in recent years. Although the federal minimum wage battle of 2019 was lost, the war continues.

Although Congress failed to raise the federal minimum wage, 21 states started the new year with increases. To meet the needs of their constituents, 14 states increased their rates due to legislation or ballot initiations, and seven were automatically given a cost-of-living raise. Also, seven states have phased in $15 minimum wage laws, doubling the number in 2019.

To review the details of state minimum wage increases for 2020, visit the U.S. Department of Labor.

The debate around federal and state minimum wage standards is ongoing and will likely be impacted by the 2020 election cycle. Even though public sentiment is warming to a $15 federal minimum wage, making it law will be an uphill battle. Let’s see what 2021 brings.

At FrankCrum, we provide insights on critical issues facing employers. To consider HR outsourcing with us, call 800-277-1620.

Haley is the Co-President of FrankCrum and President of FrankCrum Staffing. Haley earned her law degree from Stetson University College of Law and serves as in-house counsel. She is a member of the National Association of Professional Employer Organizations (NAPEO) Board of Directors, as well as a member of the Florida Association of Professional Employer Organizations (FAPEO) and the American Staffing Association (ASA). In her free time, Haley enjoys parenting, cooking, golf, humor, and the active pursuit of her journey in Christ.