June 17, 1981 is not a date that history records with any great significance. The USS Ohio, the largest submarine ever built at the time, began sea trials that day. Zerna Sharp, creator of the popular “Dick and Jane” children’s books, passed away. And in Largo, Florida, a father-son duo with the last name of Crum took their first steps into the staffing industry with the launch of The Great American Temporary Service.

Frank Crum Senior is universally remembered as a larger-than-life presence – because of his imposing physical size, but also because of the outsized nature of his personality. Intimidating but with a huge heart, Frank Senior had by the late 1970s built a successful woman’s clothing manufacturing business. Crum’s clothing lines, including Cricket Casual, employed 500 Tampa seamstresses who made garments sold at JCPenney, Kmart, Walmart, and other well-known retailers. 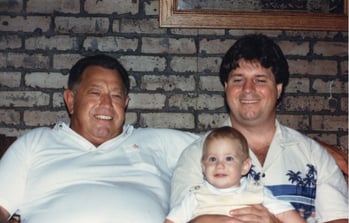 After a falling out with the company’s investors, Frank Senior sold his stake and found himself out of a job. At the same time, his son Frank Junior was making waves developing new business for a temporary staffing company out of Orlando. Although he knew little about the industry when he first started, Frank Jr. guided that company to explosive growth in its first year.

Frank Senior took note of his son’s success and approached him about going into business together by starting a staffing company in the Tampa Bay area. Though initially reluctant (he was sure his dad would be crushed by the more-experienced competition), Frank Jr. eventually acquiesced, and on June 17, 1981 The Great American Temporary Service was born.

By the mid-1980s, Frank Jr. was becoming interested in the burgeoning employee leasing industry (a forerunner to today’s Professional Employment Organizations or PEOs). At the same time Great American was facing an internal power-struggle as one investor attempted to wrestle control away from the Crum family. That investor eventually accumulated a 50.1% stake in Great American, the fallout from which leading Frank Jr. to leave the company he co-founded and take his chances on an all-new venture.

Called Ameristaff, the new employee leasing business was founded Jan. 1, 1986 and it was hard work from the start. PEOs were relatively unknown, and potential clients often didn’t understand what Frank Jr. and his staff of one other person were offering. But Frank Jr. persevered through hard work and by doing the right thing for the right reasons, in the process learning hard lessons about a rapidly growing industry that would pay dividends for Ameristaff for years to come.

Meanwhile, Frank Jr. continued working to regain control of the family business he co-founded with his father. In 1987, after much behind the scenes arm-twisting, Frank Jr. bought back controlling interest in The Great American Temporary Service, which the co-founders would now operate in concert with Ameristaff out of their office on Ulmerton Road in Largo.

The period from 1987 to 2003 was challenging for the Crum family of companies, though still marked by sustained growth. The company moved from the original Ulmerton Road location to an office park in Clearwater. Regulation of the PEO industry came down hard in the state of Florida, with new insurance requirements and other bureaucratic hoops regularly constraining the business. Competition was fierce. 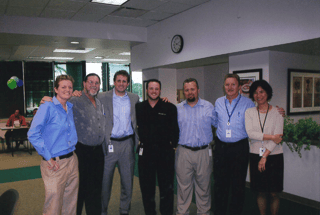 Despite the constant struggle, employees at the time remember a fun, family atmosphere. Frank Senior regularly opened his home to the full staff for elaborate Christmas parties and summer blowouts. Friday happy hour occasionally went bottom’s up right in the office – an office which, by the end of the decade, was becoming inadequate for the company’s needs.

By the early 2000s, the staff had grown enough to take over the majority of its Gulf to Bay office park. Seams were beginning to burst. Something had to change. 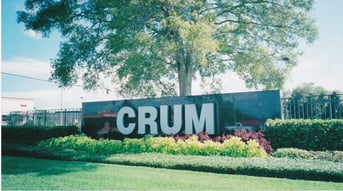 The search for a new business location went on for months, until a real estate agent told Frank Jr. about a property that had recently hit the market. The two-building complex located on Missouri Avenue in Clearwater might as well have been a palace compared to the company’s existing offices, and Frank assumed the price would put it out of reach. But market forces and a desperate seller came together, and the Crum’s were able to close on the multi-million-dollar office complex at a deep discount.

The new Crum Campus would become the home base for a company that continued to grow throughout the 2000s. In 2003, a new company was born -- Frank Winston Crum Insurance (FWCI) -- after Frank Jr. was advised that its creation would be a terrific financial opportunity that would also greatly benefit the PEO business. The creation of FWCI came with great financial risks, but Frank Jr. placed his faith in the Lord (as always) and believed He would see it through. 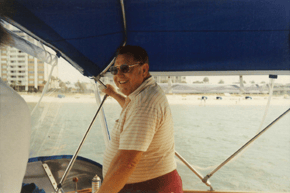 In 2006, after a long battle with emphysema, Frank Crum Senior passed away. Senior had remained a presence at the company he co-founded until the very end, and his passing marked the beginning of a new transition to the next generation of company leadership.

In the years after Frank Senior’s passing, the businesses he helped launched were quickly growing up. Not coincidentally, two of Frank Jr.’s children, Haley and Matthew Crum, were also coming of age by the end of the 2000s. The siblings had spent significant time around the company -- both as kids hanging out around the office after school, and then as teens and young adults working summers at the family shop. Frank Jr. had been quietly grooming them for years, hoping his children would join him at the helm of the family business.

Haley took a winding route, spending time in the culinary world before starting as a customer care rep for the PEO while still in college. It took a sustained influence campaign by Frank Jr. to finally convinced her to join, though Haley would agree only under certain conditions. For one, she had to start at the bottom. For another, she wanted to avoid being managed directly by her dad so that she could earn her own professional trust and respect. 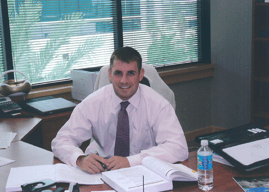 Matthew followed suit, joining Frank Winston Crum Insurance in June of 2008. As an Athlete, Matthew had always dreamed of playing in the National Hockey League, but after a successful collegiate career playing hockey at Trinity College in Connecticut and the loss of his grandfather, he realized his future lay with the family business. Matthew still possessed a love for the insurance company developed working hot summers while a student, and Frank Jr. was excited about working with his son the same way his dad had worked with him. 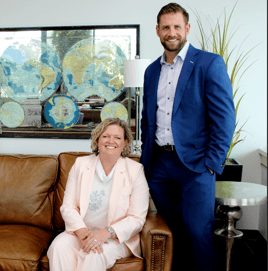 Things change, of course, and over the next decade all three Crums worked together to build the dynamic family of companies we know today. In the process, Matthew and Haley climbed the corporate ladder, rising from entry level positions in insurance and the PEO, through the managerial ranks, with Haley running FrankCrum Staffing, while Matthew became president of FWCI.

In 2020, Matthew and Haley Crum were named co-presidents of the FrankCrum PEO, with Frank Jr. staying on as CEO but limiting focus to sales, finance, and overall company leadership. Despite the changes, the FrankCrum companies continue to operate according to the same principals established by Frank Junior and his charismatic father 40 years ago. Integrity, affinity, and prosperity were the pillars of the business in 1981, and they remain so to this day.