Talking ‘bout My Generation: Effective Communication for the Multigenerational Workplace

One of the most necessary aspects of managing people is effective communication. Whether you're training employees on company processes or addressing coworker conflicts, communication that results in mutual understanding is the key to success.

However, we have all had difficulties in conveying messages to others at some point. There can be many reasons for this -- sometimes it’s a lack of interest from the other party, sometimes both individuals are coming from different reference points.

While you can’t force someone to take an interest in what you have to say, you can consider their perspective and adjust your way of communicating. While people are shaped by various factors such as culture, gender, and religion, there is one aspect we'll focus on in this article: their generation.

The vast majority of the modern American workplace is made up of four generations: Baby Boomers, Generation X, Millennials (aka Generation Y), and Generation Z.

While people are complex, we can't reduce someone to an attribute like the year they were born, however, understanding their point of reference can help us tailor a communication style most effective to the individual.

It is not a birth year that affects how a person best communicates.; rather,  the circumstances -- like the economical, political, and cultural landscape --  that person has lived through during their formative years or when they entered the workforce, that may influence their communication style. 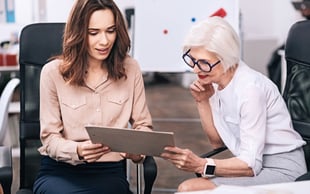 Baby Boomers (1946-1964): Baby Boomers are often thought of as idealistic. Growing up in the time of Dr. King’s “I have a Dream” speech, the Civil Rights Act of 1964 passage, and the first moon landing, it is easy to see how this generation is often described as optimistic; they were raised with the belief that they could change the world. Since technology has evolved significantly since their formative years, Baby Boomers may have a learning curve when it comes to more complex technology. Some items to keep in mind include:

Generation X (1965-1980): This generation is commonly associated with having a more skeptical or critical outlook on life when compared to Baby Boomers. Between growing up during the “latchkey kid” era when the divorce rate skyrocketed and more women entered the workforce and being exposed to bleak news topics like the War on Drugs, HIV outbreak, and increasing crime rates, they also tend to be a more independent and self-reliant group. Because of this, Xers can be resourceful, grounded in reality, and have a distaste for heavy-handed bureaucracy. This generation also tends to have a better handle on technology compared to the previous generation. Here are some tips that may help when interacting:

Millennials (1981-1996): A major influence on this generation is technology; they grew up at the start of the digital age and with 93% owning a smartphone as of 2019 it is easy to see how they have come to expect technology to be available. There was also the rise of social media, an increased emphasis on diversity and climate change, and the founding of Google putting the world’s knowledge at their fingertips. Because of this, expect a heavy emphasis on technology and more value put into work that makes a difference. Child-rearing trends Millennials were subject to, which included “helicopter parenting”, also put an emphasis on positive reinforcement so there can be a desire for steady feedback and encouragement. Some aspects to keep in mind include: 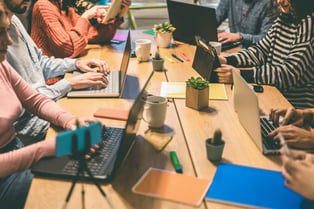 Generation Z (1997-2012): Generation Z is primarily the children of Generation X, who instilled a sense of independence, the ability to figure things out on their own, and a healthy dose of skepticism. Throw in the fact that this group was born into a technology-heavy world, using these tools comes naturally. With this group being between the ages of 9-25, trends are still developing but early benchmarks show them on track to be the most diverse and well-educated generation yet. Similar to Millennials, they place great importance on corporate social responsibility, climate change, gender equality, and other social issues. They have also grown up exposed to international events thanks to the Internet and can have a more global outlook on life. Here are some tips for working with Generation Z:

Key takeaway: one method of communication or training may not work for all employees.

To successfully reach all generations effectively,  strive to have a mix of in-person interaction, email, instant messaging, phone calls, and other technology while being aware of what methods work best for your employees individually.

Take note of the different ways employees learn, whether that's in the classroom, hands-on training, self-paced online learning, or simulated learning environments. Knowledge of generational differences, when paired with an understanding of your workplace and employees on an individual level, will aid in creating effective communication between management and employees.