Being Wrong is More Right Than You Think

The age old saying, “It’s better to be safe than sorry,” has been re-quoted for years and has traditionally been a desirable quality in a reliable and trustworthy employee. These days, however, there has been a shift from reliable to revolutionary. Innovation has taken center stage and isn’t going anywhere soon. The world is now being shaped by those who view failure as success.

Failing isn’t something anyone sets out to do. We are driven to please others and in turn we find satisfaction. For just a second take a look at the world we live in. Society is bombarded with products, services and advertising campaigns. Every industry has a front runner who is “doing it best.” When you go back to these companies’ original products and ideas, you might be shocked how many times they have been changed and reinvented. The innovators and risk takers who thought of these tried and failed more times than they can count.

Michael Jordan missed over 9,000 shots in his career; Babe Ruth struck out 1,330 times; and it took Thomas Edison over 1000 tweaks to invent the light bulb. Harland Sanders’ recipe for his Kentucky Fried Chicken was rejected 1,009 times and Walt Disney was fired from his first job for “lacking imagination and having no good ideas.” There is an evident pattern here: each and every one of these people was extremely successful, yet each has failed miserably time and time again. “Fail, Fail Again. Fail Better,” is a quote from Samuel Beckett that encourages positive thinking in the midst of trying times.

Many times people are afraid to put themselves out there for fear of being rejected or cast in a negative light. However, the best career move you can make is to show others your passion, desire, and drive; and these things can’t be done without risk. Chances are you will fail. Good ideas often come before great ideas, and you will encounter people who disagree with you. With all of that said, at the end of the day people will recognize your effort. You will likely garner respect for your drive as much (if not more) than your successes. Benjamin Disraeli once said, "All my successes have been built on my failures.” Failure breeds success and those who can accept the challenge will be seen in a positive light. 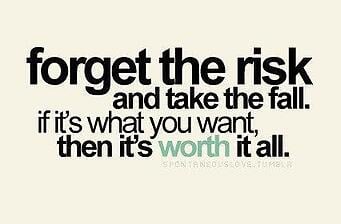