The History of Daylight Savings Time 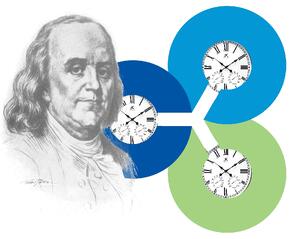 Daylight Savings Time (DST) has a long and complicated past, dating all the way back to 1784 when Benjamin Franklin first proposed the idea. In typical Franklin fashion, he wrote to the Journal of Paris saying that he had "discovered" that the sun begins giving light as soon as it rises. He hoped to find a way to convince the Parisians to rise with the sun and cut back on their "candle burning ways."

In the early 1900's a British builder named William Willet began fighting to advance clocks 20 minutes each Sunday in April, and then turn them back 20 minutes each Sunday in September to get the most out of the day. He wrote a pamphlet called "The Waste of Daylight" in 1907 and proposed this time change to Parliament in 1908, 1909, 1910, and 1911. Every time the idea was shot down.

In 1916, only a year after Willet died, Germany began observing daylight savings in order to save energy for the war efforts of World War I. Willet would have been thrilled when Britain followed suit only one month later. In 1918 the United States joined the war and adopted DST as well. There was controversy after the war whether or not the U.S. should continue observing the time change. President Wilson was in favor of continuing the practice, but Congress vetoed his decision and repealed daylight savings when farmers complained that the time difference created conflicts with merchants in town.

Come WWII, the U.S. re-adopted Daylight Savings Time, less than a month after the attack on Pearl Harbor. After the war, Congress again repealed the time change, but with the shift from agricultural to industrial businesses, many areas continued to observe the extra hour each summer, creating a great deal of confusion from city to city. At one point a 35-mile bus ride from West Virginia to Ohio took passengers through 7 different time changes.

Noting the chaos that these independent time observances caused, Congress adopted the Uniform Time Act in 1966. The time act allowed states to choose whether to observe DST, but ruled that the decision needed to be observed state-wide. As of 2012, only Arizona, Hawaii and Puerto Rico have chosen not to observe Daylight Savings Time.