An Analysis of the Federal Minimum Wage Proposal 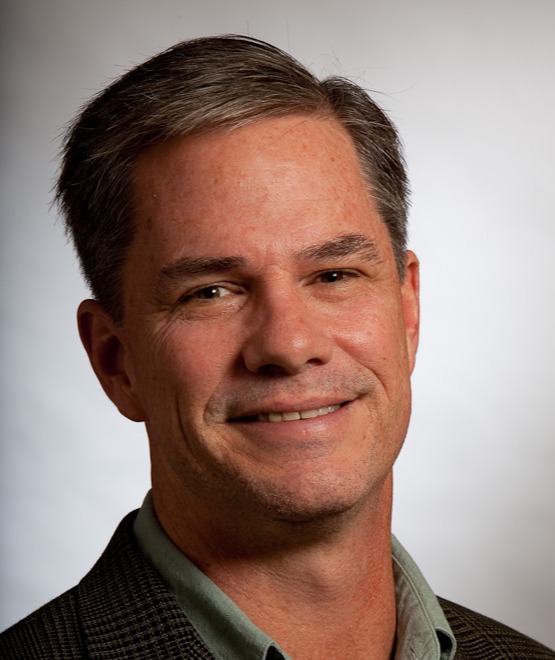 The federal minimum wage rate has not changed since July 24, 2009 and has remained at $7.25 per hour. The time since the last update to the minimum wage is the longest since the 1938 passage of the Fair Labor Standards Act.

Recently, the Raise the Wage Act was reintroduced in Congress; this act would bring the minimum wage up to $15 per hour by June 2025 using annual increases.

The Bite of Inflation on a Stagnant Minimum Wage 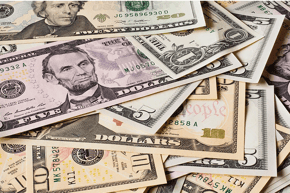 Since well over a decade has elapsed without an increase to the minimum wage, inflation has continued to erode the purchasing power of anyone paid at the federal minimum wage level.

When adjusted for inflation, the value of the $7.25 minimum wage has diminished to roughly $5.99 by the end of 2020. The following graph shows the decline of the inflation-adjusted hourly minimum wage from 2009 to 2020:

If market-based pay changes were applied to the minimum wage from 2009 to 2025 using annual compounding, we could get an idea of where the minimum wage should be — though this assumes, of course, that the $7.25 in 2009 was appropriate to begin with.

The year-over-year changes in private sector hourly wage rates since 2009 (sourced from the Economic Policy Institute) were applied to get an estimate of the minimum wage by the year 2025. 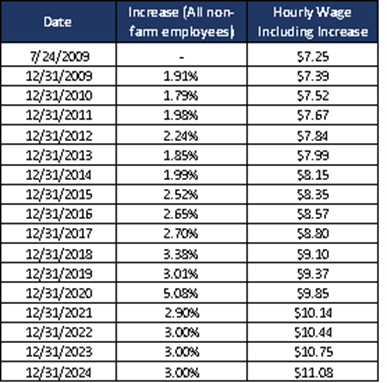 The table to the right shows how annual increases would influence the minimum wage over time, eventually landing around $11 per hour by the end of 2024.

Whether we consider how inflation has diminished the current minimum wage or what the minimum wage would look like if it were updated to reflect market-based increases, it is reasonable to ask if changes are needed to bring the minimum wage set back in 2009 in line with 2021 and beyond.

Federal vs. State vs. Local

A number of states have recognized the need for change, and 20 states enacted minimum wage increases on January 1, 2021. These changes are in addition to other states (and many cities and counties) that had already enacted minimums above the federal requirements.

Beyond state and local changes, some companies have recently decided to raise the pay of the lowest-paid workers; both Chobani and Wayfair recently set their minimums at $15 per hour.

There is an argument that the minimum wage should be set differently based on wage differentials in different areas of the country.

For example, prevailing wages for the same job are different in Selma, Alabama and San Francisco, California. States and cities have adopted higher minimum wages partly in recognition of the differences.

Preparing for the Minimum Wage Increase

One way or another, pay for lower-paid workers is increasing, whether by federal legislation, actions by state and local governments, or even competitive pressure from other companies.

Companies need to begin planning how to implement these types of changes in advance, rather than being caught off guard when new laws are passed.

A rather simple first step for companies to take would be to see how many employees they have that are currently paid below $15 per hour (or another applicable rate), then calculate how much it would cost to bring all of these workers to the new rate.

When running this calculation, it is important to consider factors like overtime, employment taxes, benefits, and incentive payments (if applicable) to ensure that the full cost is captured.

The Ripple Effect of Wage Compression

After determining the financial implications of an increase to minimum wage requirements, the next (and more difficult) compensation issue for companies to tackle will be wage compression.

Wage compression describes the situation when there is only a minor difference in pay between employees that may have significant differences in skills or experience. If the minimum wage was increased, lower-skilled employees may suddenly be paid similarly to those with higher skills, resulting in internal equity problems.

It may become necessary for companies to update their salary structure to mitigate this problem, and beginning to plan for this situation now makes good business sense.

Understanding how changes to the minimum wage at the federal (or state/local) level could impact salary planning and budgets could help businesses plan for changes, potentially implementing increases in steps, rather than being forced to make significant changes all at once.

Joe is the Managing Consultant and founder of The POE Group, an independent compensation consulting firm. Joe is a Certified Compensation Professional (CCP) with over twenty-five years of compensation and human resources experience. His areas of expertise include reward system design, performance measurement, organizational assessment, project management, change management, and communication.


In addition to managing The POE Group, Joe is an adjunct professor at the University of South Florida, currently teaching Compensation Design and Management. Joe graduated from the University of Illinois with a degree in Organizational Psychology and earned a Master’s degree in Management from Auburn University.